Afro-Native/Ancestral Memory: An Interview with Mama Penny Gamble-Williams, by Charlie, 17

May 10, 2020
We're all doing at-home school or college and not reading a lot for pleasure. Some of us are experiencing major stress and flare ups of existing conditions. Our parents are furloughed or in essential jobs. We have a half dozen unfinished kidlit & YA Lit reviews and essays, which we promise we'll get to. In the meantime, we are excited to present interviews by some of our mentors and influencers. 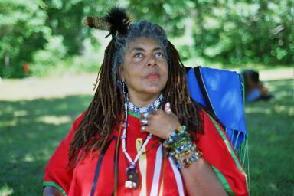 It's been the most meaningful event of my time with Indigo’s Bookshelf to interview Mama Penny, as she invited me to call her. This is a simple version of her biography: Penny Gamble-Williams of Wampanoag and African heritage is an artist and spiritual leader involved in Native land, freedom of religion and sacred site issues, Indigenous and environmental rights. She was incredibly generous with her knowledge and experience, knowing that we would share it with all readers. She was warm and supportive at every turn. I am still drinking her words.

C:  We found out about your art, activism and Chappaquiddick spiritual leadership from our librarian Ann Clare LeZotte. You worked with Scholastic as a cultural sensitivity reader for Ms. Ann’s middle grade novel, Show Me a Sign. How was that experience?
P: My experience as a cultural sensitivity reader was a great experience.  I knew that I had to read the book with an open mind.  The storyline was interesting because it dealt with hearing-impaired people living on Martha’s Vineyard during the 1800s. The Aquinnah Wampanoag characters played an important role in the story because during that time in history on Martha’s Vineyard so many changes and interruptions within the Wampanoag population made life challenging for them because of cultural clashes and changes in the land.  Show Me a Sign explored some of those issues.  The book was well-written, and I enjoyed reading it! 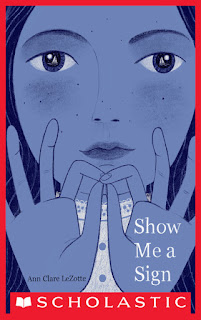 C: The Black Wampanoag characters in Ms. Ann’s book are secondary. I’m always looking for more representation. My father Abe is Florida Black Seminole tracing back to an escaped enslaved man from South Carolina Lowcountry. The historical treatment of Afro Seminoles is complicated and often painful. My mother Deatrice is African American from Newberry, Florida with a family history of lynching. That’s all my heritage. You’ve done such important work to educate all ages. Can you tell our readers a little about Afro Native history and contemporary life?
P: There are historians and academics who have traveled around the world finding documents that show how Africans sailed to “Turtle Island” (The Americas) before Columbus!  The late Ivan Van Sertima wrote, “They Came Before Columbus” in 1987. Jack D. Forbes, Powhatan-Renape and Lenape, wrote a book called “Africans and Native Americans: The Language of Race and the Evolution of Red-Black People” 1993.  These were important bodies of research and work that I was able to utilize as I explained my own Indigenous and African roots. 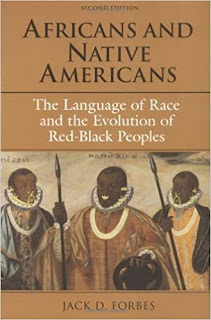 As a cultural presenter, artist, and storyteller I frequently got invited to speak during Native American Heritage Month at Government agencies.  As I told my family story about being Chappaquiddick Wampanoag most people would comment about not ever hearing about the African and the Native having any connection.  I would have to explain that the educational system generally separates the two cultures which do not allow students to see the historical connections. 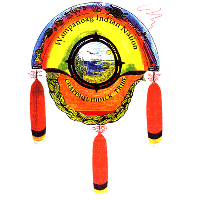 Slavery in America was horrible, debasing, and inhumane.  When enslaved people in the “New England” states, escaped from their masters, they were welcomed in the various Indian communities.  The Chappaquiddick would hide escapees as did the Aquinnah Wampanoag. The mainland tribal communities did the same.  In some instances, relationships grew, there were marriages, and families expanded! This history is valuable, and people should know about it.
Throughout the years as more African Americans recognize their family connections to tribal communities they were not always welcomed.  There are people who will look at a person and not want to recognize them as being Indian.  The question is, “What does an Indian look like?”  That is one question that was raised during the creation of the traveling Smithsonian exhibit called, “IndiVisible, African Native American Lives in the Americas.”  My husband and I along with another person wrote a concept paper that we presented to The National Museum of the American Indian. 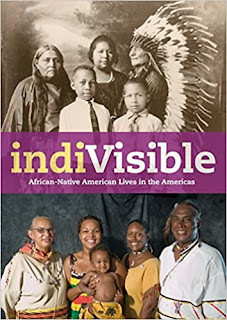 My husband and I were part of the team of curators for the exhibit.  We poured a lot of time, emotion, and effort…and love into this project that took four and a half years to do.  We highlighted many historical periods of time throughout the Americas showing the interconnections which produced children who carried both African and Indigenous blood as well as. In some cases, European blood! 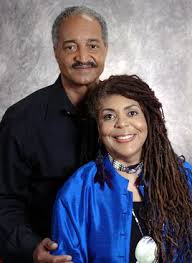 Mama Penny and her husband
This is not an easy story because it brings out the terrible treatment that was perpetrated against them.  It is important to listen to the elders as they share family stories and ask questions.  Considering all the years of fighting to hold on to the land, Spiritual and cultural ways, and language has not been easy for many Tribal Communities.  People have endured and survived genocide and assimilation in order to exist.
Ancestral memory of centuries of colonialism, racism, and abuse at the hands of people who hate has had major effects on Indigenous people today.  Many Afro-Native People who know their family history and partake in ceremonies, gatherings, and pow wows are finding ways to bridge the cultures and are comfortable with themselves!  Accepting one's self as a whole being is important! 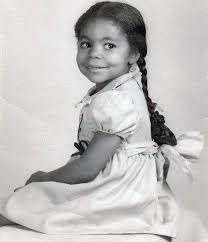 Penny as a sweet little girl
C: You teach schoolchildren, you’ve broadcasted on the radio, you’ve curated museum exhibits. You’re also a visual artist, writer and involved in theater. How is your artistic expression different and the same as your activism and spiritual leadership?
P: My roots and connection to the Spirit of my people to the roots of the land make me who I am today!  I feel blessed to have had many experiences and avenues to express myself through cultural identity, art, music, poetry, dance, and storytelling.  In 1995 was elected and served as the Sonk Squa (chief) until 2002. After the election, our elders asked me to be the Spiritual Leader, a position that I still hold with honor and respect.  As an activist and all that I have done, and continue to do, I feel that it ties into my Spirit and my life.  In other words, it is natural for me and I am comfortable with it.  These are the gifts that The Great Spirit gave me, and I am grateful that I have them and use them to express myself and share with all people. 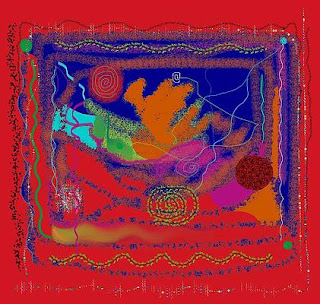 "Red Journey" by Mama Penny Gamble Williams
C: All Indian Country is devastated to hear about the Mashpee Wampanoag Tribe’s battle to retain its reservation on ancestral homeland during COVID-19. The outcome could affect all nations and tribes. But it hits close to home for you. There is also a dangerous attack on ICWA. Can you give young people spiritual counsel on how to stay strong in these fights without giving way to fear and anger.

P: We are all being challenged right now!  Finding the strength within ourselves means moving away from fear.  There has been a shift which means that we have been given a chance to re-evaluate our current situation and make a positive transformation.  Staying open to the Universe and allowing ourselves to be still long enough to listen to the Divine Spirit of The Creator, our Ancestors, and Mother Earth.  Now is the time to imagine and visualize a world that works for all and that includes the generations to come!

C: There are *a lot* of bad books about the Wampanoag for young readers. What do you recommend as accurate resources, print or online, for students and young readers?
P: There are websites online with suggestions about great Indigenous authors who have written books for young adults as well as history books.  I have posted resources (below). 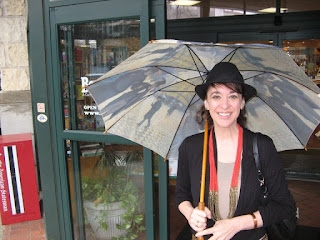 C: Last but not least, Ms. Ann mentioned that you might be writing a children’s book based on your family’s experiences. Any truth to that? That’s the kind of book we’d like to read!!!!
P: I have written a self-published book called “The Gathering” that is going through the editing process and a book of my poems are in the works.  The story is about my great aunt Sarah when she was a child living on Chappaquiddick during the 1840s.  The book is based on family oral history.  I will let you know when it is available.

February 25, 2020
To write about Native nations or tribes or not? That is the question. If you are a non-Native author writing a US historical novel for kids or teens, there are several challenges. One is that Indigenous people have lived/are living in places you describe and called/call them home. (Notice I'm assuming that you're not writing a Native MC. Unless you are Debbie Dahl Edwardson writing MY NAME IS NOT EASY (and you're not) don't try it.) If you don't acknowledge this basic fact in our colliding, brutal histories, you are practicing erasure and will be called out for it. If you do acknowledge it, you most likely will be criticized for not getting everything right.                                                                Great book! That's normal--we exist in a White supremacist American society with deep rooted prejudices and stereotypes that run in every direction. We have to dig deep to pull them up. Many of us are doing this work, but we still
4 comments
Read more

INDIAN NO MORE, by Charlene Willing McManis with Traci Sorell: a Review by Ashleigh, 13

July 01, 2019
INDIAN NO MORE, by Charlene Willing McManis with Traci Sorell is one of the best books I've ever read. Thank you to Tu Books and Stacy L. Whitman for sending @ofglades the uncorrected proof to review. At first, I was sorry it wasn't an audio book, because it is sometimes easier for me to listen to books. But just after reading the first chapter, "The Walking Dead"--SNAP!, the voice of ten year-old Regina Petit was in my head. It stayed there till the last page, and it's still talking to me now. Regina says, "My family was Umpqua. I was Umpqua. That's just how it was." But it gets messy fast. She has always lived on the Grand Ronde reservation, thirty miles from Salem, Oregon, but Congress passes a bill that says that the Umpqua (and other tribes in Oregon) have been terminated. Regina's grandmother Chich tells her, "The President has just signed the bill from Congress saying that we're no longer Indian." But before that we
1 comment
Read more

August 04, 2019
We sat together and read this as a group. Alexis, 19 and Charlie, 16 took turns reading it out loud. Ashleigh, 13 and Michael, 17 listened and we all stopped to go over things. We rarely agree on everything, but all voices were heard and respected. Ashleigh: When I first picked up the book, I didn't know what I was looking at. Then I realized that the words "An Indigenous Peoples'" are over the sky and "History of the United States" are over the land that has the American flag spray painted on it or creeping on it like a shadow. Alexis: It's striking! Of course, it's the same cover as the previous adult version by Roxanne Dunbar Ortz, which it should be said none of us have read. Charlie: This version is much more friendly for us--I mean, it was written for our ages. Alexis: Yes! Where do you think the book would start in history? I had an interesting reaction to that. Ashleigh: Yeah, we talked about that. How many of us just assumed
3 comments
Read more