Echoes and Wolves: The Imagination of Katherena Vermette, by Alexis, 19

June 01, 2019
I have been going through a bad time, and looking for (any)things I can connect with. I have piles of library books next to my bed, and I picked up two this afternoon that I had looked at when I first checked them out, but didn't really get into. Something told me to hold on to them rather than quickly returning them. I'm glad I did.

I became aware of Katherena Vermette, a Metis writer from Treaty One territory, Winnipeg, Manitoba, Canada, when Debbie Reese first wrote about her graphic novel series, A Girl Called Echo. I totally related to the first volume, Pemmican Wars, which my library purchased with *Friends of Indigo* funds. I am a Florida Seminole citizen, so this isn't my Indigenous history. Unlike Echo, I have a really close relationship with my mom, Gail. But Echo's story drew me in. Vermette's imagination sparked my imagination. Here's my review of Volume 1. I couldn't wait for Volume 2 to be released. 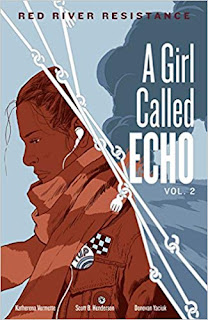 A Girl Called Echo, Volume 2: Red River Resistance taught me a lot of history I'd never been told. This is the description from the publisher:

"Picking up where Pemmican Wars left off, Red River Resistance sees Echo Desjardins adjusting to her new home, finding friends, and learning about Métis history. One ordinary afternoon in class, Echo finds herself transported through time to the banks of the Red River in the summer of 1869. All is not well in the territory, as Canadian surveyors have arrived and Métis families, who have lived there for generations, are losing access to their land. As the Resistance takes hold, Echo fears for her friends and the future of her people in the Red River Valley."

The words and graphics (by Scott B. Henderson and Donovan Yaciuk) flow really well, like in Volume 1. I love seeing Echo's bedroom, which reminds me of mine. Music is still a major part of her life, and we see posters on her walls, including The Ramones and Pearl Jam, and the playlists on her phone. I'm thinking I might recreate one of the playlists and listen next time I read Red River Resistance. I like Echo's new school friend, Micah. I think there's ambiguity and the reader can decide if Echo is falling asleep and dreaming or slipping into past events in Metis history. Is it her age and vulnerability that is making the transitions possible? Her visions run parallel to what she's learning in school. This is a progressive school with good teachers.

I wish there had been more with her mom in a treatment facility. I really thought there would be. She does make a connection with her foster mom when she wakes up from "a nightmare." They awkwardly embrace. I am glad to see the teacher Mx. Francois again, who is fat with a cool bowtie and suspenders. "They're pretty tough," Micah says to Echo. They organize a Indigenous bake sale; one of Vermette's details that effortlessly creates an authentic environment for Native kids and shows other kids we do many of the same things they do. 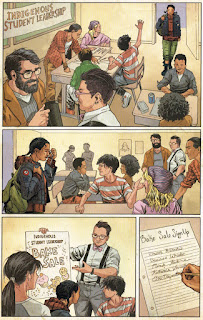 A quick Google search shows that Volume 3, Northwest Resistance, is set to be released in 2020. That's exciting! How often do Native girls get to see themselves in an ongoing graphic novel series? Echo is punk not mainstream which makes her more interesting. Vermette may be trying to reach girls in foster placement, but her character's alienation makes sense to a lot of us. It echoes and echoes.

I also have a picture book by Vermette with illustrations by Julie Flett, who has done so many books we love. The book, The Girl and the Wolf, is something I haven't seen before. 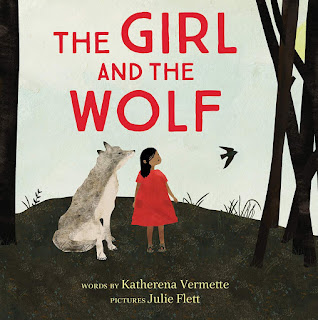 Let me start at the end with the Author's Note:


This is a completely made-up story. The girl in her red dress and the wolf who isn't really scary came to me when I was reading a lot of European fairy stories.

This I like! An Indigenous writer admitting borrowing from European stories and spinning her own tale. This is very different from White authors appropriating "traditional" Indigenous stories and passing them off as real rather than made-up.

There has been good discussion about Indigenous writers misusing traditional "stories" or beliefs from their or other Tribes or Nations, with or without permission. I don't think that's what's happening here. I think this is a creative vision by an author (and illustrator) putting their own twist on the familiar (in many cultures) story of girl and a wolf.


The girl ran through the bush while her mother picked berries. 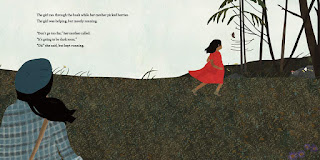 But this is not a story of familial bonding and natural innocence, like Julie Flett's Wild Berries. That book reminds me a little of McClosky's Blueberries for Sal.

In The Girl and the Wolf, a girl loses sight of her mother in the woods. "Every thing got quiet and dark. The girl felt cold and scared. She didn't know what to do." Then:

Out from between the trees, a tall grey wolf with big white teeth appeared.

I know you're thinking Little Red Riding Hood. The girl is wearing a red dress. And then there are those teeth. But it doesn't go like that. There is definitely some menace: "His wolf breath was hot and stank of meat." But there is also companionship and guidance, which doesn't appear in any of those European fairy tales I've read. The words and illustrations--which are spare, direct and essential on each page--pace the story perfectly and draw you in. I was taking deep breaths and turning the pages slowly. 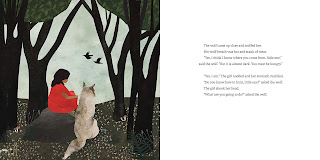 When she is reunited with her mother carrying berries, her mother smiles and says, "Real wolves can hurt people, but I've heard old stories about wolves who help lost children too." Do you have a story like this in your community, Tribe or Nation? If so, I'd like to hear if you believe this was handled well.

As for me, the mood reminded me of dreams I had as a child and meaningful encounters I've had with animals that I don't wish to share here. Vermette has a talent for showing girls' private worlds. The places we belong and where we find ourselves lost.

At the end, the girl tells everyone about her adventure and "That night she tied tobacco in a red cloth and left it at the bush's edge. Because she didn't know a better way to say thank you."

I don't know a better way to say thank you to Katherena Vermette but to leave this review for her and others to find.

February 25, 2020
To write about Native nations or tribes or not? That is the question. If you are a non-Native author writing a US historical novel for kids or teens, there are several challenges. One is that Indigenous people have lived/are living in places you describe and called/call them home. (Notice I'm assuming that you're not writing a Native MC. Unless you are Debbie Dahl Edwardson writing MY NAME IS NOT EASY (and you're not) don't try it.) If you don't acknowledge this basic fact in our colliding, brutal histories, you are practicing erasure and will be called out for it. If you do acknowledge it, you most likely will be criticized for not getting everything right.                                                                Great book! That's normal--we exist in a White supremacist American society with deep rooted prejudices and stereotypes that run in every direction. We have to dig deep to pull them up. Many of us are doing this work, but we still
4 comments
Read more

INDIAN NO MORE, by Charlene Willing McManis with Traci Sorell: a Review by Ashleigh, 13

July 01, 2019
INDIAN NO MORE, by Charlene Willing McManis with Traci Sorell is one of the best books I've ever read. Thank you to Tu Books and Stacy L. Whitman for sending @ofglades the uncorrected proof to review. At first, I was sorry it wasn't an audio book, because it is sometimes easier for me to listen to books. But just after reading the first chapter, "The Walking Dead"--SNAP!, the voice of ten year-old Regina Petit was in my head. It stayed there till the last page, and it's still talking to me now. Regina says, "My family was Umpqua. I was Umpqua. That's just how it was." But it gets messy fast. She has always lived on the Grand Ronde reservation, thirty miles from Salem, Oregon, but Congress passes a bill that says that the Umpqua (and other tribes in Oregon) have been terminated. Regina's grandmother Chich tells her, "The President has just signed the bill from Congress saying that we're no longer Indian." But before that we
1 comment
Read more

August 04, 2019
We sat together and read this as a group. Alexis, 19 and Charlie, 16 took turns reading it out loud. Ashleigh, 13 and Michael, 17 listened and we all stopped to go over things. We rarely agree on everything, but all voices were heard and respected. Ashleigh: When I first picked up the book, I didn't know what I was looking at. Then I realized that the words "An Indigenous Peoples'" are over the sky and "History of the United States" are over the land that has the American flag spray painted on it or creeping on it like a shadow. Alexis: It's striking! Of course, it's the same cover as the previous adult version by Roxanne Dunbar Ortz, which it should be said none of us have read. Charlie: This version is much more friendly for us--I mean, it was written for our ages. Alexis: Yes! Where do you think the book would start in history? I had an interesting reaction to that. Ashleigh: Yeah, we talked about that. How many of us just assumed
3 comments
Read more